In its role as promoter of exceptional young talent, the Keyboard Trust has contributed to the regular Wednesday lunchtime organ recitals at the Temple Church for nearly 20 years. The latest young arrist, billed as a ‘rising star of the organ world’, is Elli-Mae McGlone. Still a student at the Royal Birmingham Conservatoire, Elli-Mae has held the post of Organ Scholar at Bury St Edmunds Cathedral and is already a multiple prizewinner.

30 minutes does not seem long in which to make one’s mark, but Elli-Mae proved that it can be transformative, offering two major works: Praeludium in C by Buxtehude and the Chorale and Variations from Mendelssohn’s 6th  sonata, interspersed with shorter Romantic pieces by Brahms and Franck and a 20th century barnstormer by Langlais to finish.

Buxtehude is best known as the celebrated organist the 20-year-old Johann Sebastian Bach trudged 250 miles to hear at Lubeck in north Germnay. Much of his organ repertoire is now lost, but the works that remain justify his reputation as the greatest organist and composer of the late 17th century. The remaining 19 Preludes demonstrate in their variety the vogue for stylus fantasticus incorporating a variety of compositional techniques including improvisation and fugue. Praeludium in C is in three sections: Prelude, Fugue and Chaconne. The most important principle of this style was formal freedom as described in a contemporary account:

‘Players should not play strictly according to the score, but imitate the singer more. Now swift, now hesitating, now in one voice, now in many voices, now for a while behind the beat, but not without the intent to please, to overtake and to astonish’.

We are not to be surprised, then, by the dramatic pedal solo that opens the work, extended fugal passages, virtuosic semiquaver flourishes and a dance-like chaconne to finish! While observing the norms of Baroque registration, Elli-Mae used the full range of the 4-manual organ to heighten the unexpected: clarity of voice-leading in the fugato and brighter stops including Tromba and Clarion in the more improvisatory, virtuoso sections. 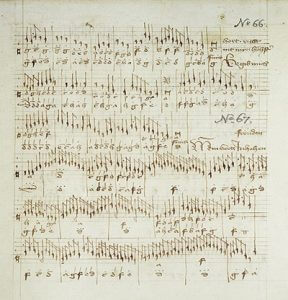 an early form of notation also used by JS Bach

Brahms’ chorale prelude Herzlich Tut Mich Erfreuen made a skilful link between the Buxtehude and the Mendelssohn Chorale and Variations, despite being a late Brahms work of 1896. It is written in traditional cantus firmus style where the chorale melody sings slowly above complex flowing lines. The German Lutheran hymn, based on a secular song about the return of spring, is heard just once. Elli-Mae gave to the melody just the right amount of rubato to emphasize its beautifully shaped lines and finely judged, restrained registration lent the accompaniment an elegiac, Brahmsian sound. 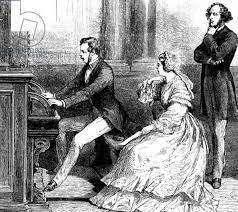 Mendelssohn with Queen Victoria and Prince Albert at the organ

‘His execution of Bach’s music is transcendently great, his extempore playing is very diversified – the soft movements full of tenderness and expression, exquisitely beautiful and impassioned. In his loud preludes there are an endless variety of new ideas  and the pedal passages so novel and independent  as to take his auditor quite by surprise’.

Mendelssohn’s organ playing was just as legendary in his native Germany as in England, which he called his second home. The Chorale and Variations constitute the first movement of Sonata no 6 in D minor commissioned by the English publisher Coventry in 1845. The 6 works of Op  65 were originally conceived as organ voluntaries and then were combined into sonatas – no 3 was written for Mendelssohn’s sister’s wedding. He was invited to perform them at the 1846 Birmingham Festival but the state of English organs lagged behind those in mainland Europe and Mendelssohn wouldn’t risk it:

‘The last time I passed through Birmingham the touch of the organ appeared to me so heavy that I could not venture to perform upon it in public. If however it is materially improved I shall be happy to play one of my sonatas; but I should not wish this to be announced before I had tried the organ myself’.

Mendelssohn chose the Lutheran chorale Vater Unser In Himmelreich (Our Father, who art in heaven) on which to base a short set of variations where the tune is stated in full in all registers and only in the final, thrilling toccata is it shared after appearing dramatically in the pedals. Despite this similar construction, each variation has its own character, highlighted by Elli-Mae in the choice of reed stops for the chorale and well-balanced registration for the flow of counterpoint.

The early part of the recital featured music from the German Lutheran tradition from Buxtehude to Brahms taking its inspiration from the chorales of the late Renaissance.  The second part moved to Catholic France in the music of Cesar Franck and Jean Langlais.We entered next the perfumed world of French Romantic music dominated by the mighty organs of Aristide Cavaille-Coll. Cesar Franck demonstrated these organs throughout France for him and played his own in the Basilica of St Clothilde in Paris.Cantabile is taken from Trois Pieces Pour  Orgue written in 1878. The date is significant as around this time Franz Liszt produced his Bagatelle Sans Tonalite. While rooted in Classical tonality and the sugared religiosity fashionable at the time – Faure’s In Paradisum from the Requiem being a prime example – the haunting melody and unexpected harmonic progressions hint of change to come. Elli-Mae seemed most at home in this music, using a finely distinguished palette to capture the mood of melancholy nostalgia. 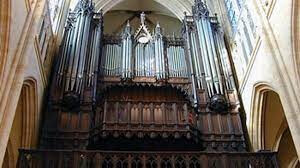 The Cavaille-Coll organ at the Basilica of  St Clothilde, Paris

Te Deum from Hymne  d’Actions de Grace  by Jean Langlais brought the recital to a fitting climax. Despite being blind from the age of two due to glaucoma, Langlais led a successful life as concert artist, Professor at the Paris Conservatoire, prolific oomposer and successor to Franck at St Clothide. He described himself as ‘Breton, foi Catholique’, and these two elements fuel the heart of his music.

In Te Deum he reached back further than any of the other composers represented to early plainchant and presents it as a Catholic responsorial psalm. The chant, which would normally be sung by a cantor, is heard solo on the pedals with the response in the upper registers.And what a response! The text of the 4th century Latin hymn of praise includes these lines:

‘To Thee all Angels cry aloud, Heaven and Earth are full of the majesty of  Thy Glory’ 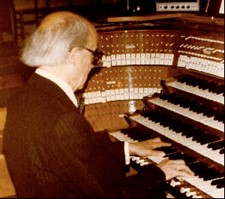 The cries are mounting chords of angular dissonance, certainly loud enough to be heard in heaven. Elli-Mae used the full powers of the bright brass stops – Tromba, Trumpet, Clarion – to animate the  cosmic drama.

For her debut recital, Elli-Mae chose a largely reflective programme with only the Mendelssohn toccata and the Langlais giving the organ full rein. She played the melodic lines with clarity and often a lingering affection and demonstrated a keen ear in her suble tonal layering. All credit to her inspirational teachers at Birmingham, Daniel Moult and Nicholas Wierne, for developing such intuitive artistry and enabling us to hear a recital of quiet authority. 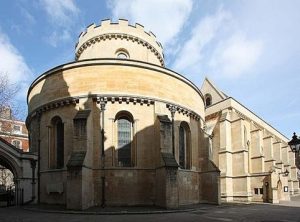 ANGELA RANSLEY IS DIRECTOR OF THE HARMONY SCHOOL OF PIANOFORTE AND ALSO WORKS AS A FREE-LANCE ORGANIST. 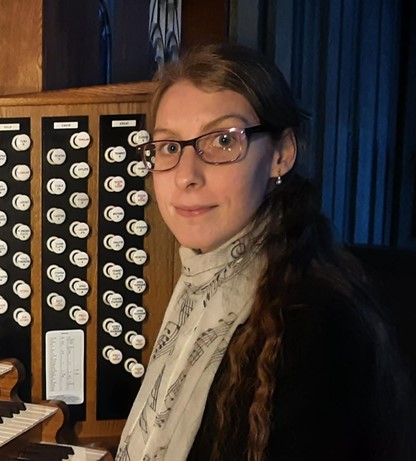 More about this artist