„…When he plays, a majestic atmosphere starts to fill the auditorium … He who listens carefully may appreciate Brendle’s narrative skills. He does not play in a one-dimensional splendour but chooses his means of expression prudently, deliberately … knows the meaning of every sound…“ (Nordbayerischer Kurier)

Born in 1990 Adrian Brendle began studying piano with Noriko Ishikawa at the age of six. At fourteen he began studying under concert pianist Professor Sontraud Speidel, and one year later he was admitted to the Pre-College of the University of Music Karlsruhe. While still attending school he successfully took part in numerous national competitions, inter alia the Robert Schumann competition for young pianists in Zwickau, where he won the first prize.

Upon completing grammar school he enrolled at the University of Music Karlsruhe. He graduated with distinction in 2014 and is now pursuing his postgraduate studies with Ian Fountain at the Royal Academy of Music London.

As a concerto soloist Adrian has performed works by Beethoven, Weber, Mendelssohn, Schumann, Liszt, Saint-Saëns, Rachmaninoff, and (in the composers presence) Wolfgang Rihm with the Karlsruhe Chamber Orchestra, the University of Music Karlsruhe Chamber Orchestra, Dortmund Philharmonic, Symphony Orchestra Bruchsal, Johann-Strauss-Orchestra Wiesbaden, the Royal Academy of Music Symphony Orchestra and the State Youth Orchestra Baden-Wuerttemberg with which he played Gershwin’s Rhapsody in Blue in the 2012 concert tour: “… [his] mature technical control, rhythmical feeling for swinging passages and nuances made the popular work a rousing experience that caused rapturous applause.” (Schwaebisches Tagblatt)

Adrian is also a talented reorchestrator: his edition of Schumann’s A minor piano concerto for piano and strings has been performed by several orchestras with him as a soloist. In addition to his work in Germany, he has performed in Vienna, Rome, Paris, Salzburg, London, Timisoara (Romania), Damascus, Amman (Jordan) and Rabat (Morocco).

Since 2011 Adrian has been a scholar of the renowned German National Academic Foundation (Studienstiftung des deutschen Volkes). 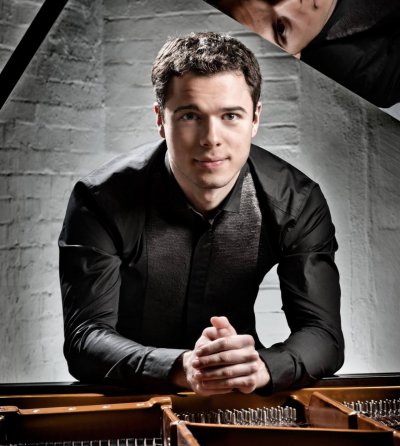