Ivelina Krasteva was born in 1998 in Plovdiv, Bulgaria. She started to play the piano at the age of 4. Two years later she got accepted in the National School of Music and Dance in Plovdiv, where she studied with Elena Velcheva until her graduation with distinction in 2017. Currently, Ivelina is acquiring her undergraduate degree studying as a HWE and WL Tovery Scholar with Ronan O’Hora and Katya Apekisheva at the Guildhall School of Music and Drama in London.

As a dedicated chamber musician, Ivelina has worked in various ensembles and has been a prize winner in numerous competitions such as the First prize at the International Music Competition in Belgrade, Serbia, category “Chamber music”, as a part of a piano trio, 2016. She has received tuition from the Endellion Quartet, the Gould Piano Trio, Carole Presland, Caroline Palmer, Adrian Brendel, Ralf Gothoni, Levon Chilingirian.

Ivelina has given concerts both as a solo pianist and with orchestra. She has performed in several countries – Bulgaria, Turkey, Austria, Romania, Italy and the UK. Highlights include a performance of Prokofiev’s First Piano Concerto with the Plovdiv Philharmonic Orchestra and Mozart’s 24th Piano Concerto with the Vratsa State Orchestra. Days before the UK lockdown Ivelina won the Coulsdon and Purley Concerto Competition, which will result in her concerto debut in the UK in the next season, performing Prokofiev’s Piano Concerto no.3 with the Worthing Philharmonic Orchestra under Dominic Grier. 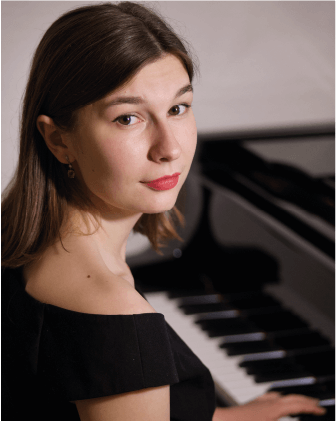