Leonora Armellini, born in Padua (Italy) in 1992, graduated summa cum laude in the Conservatory at the age of 12 with Laura Palmieri, heir of the school of the great pianist Arturo Benedetti Michelangeli. She gained the first prize at “Premio Venezia”, the most important competition for the best graduates in Italy (2005), the first prize in the “C. Togni” International Piano Competition in Brescia (Italy) in the section piano and orchestra (2009), and received many awards for her qualities and artistic career. In the International F. Chopin Piano Competition in Warsaw (2010) she gained – sole italian woman in the history of the Competition – the “Janina Nawrocka Award” for her “remarkable musicality and beauty of sound”.

She made already more than 300 public appearances in important european concert halls and in Carnegie Weill Recital Hall of New York, Stein Auditorium of New Delhi and Tunisi. Recent concerts for “Martha Argerich Project” in Lugano, International Chopin Festival in Duszniki Zdroj (Poland), “Chopin and His Europe Festival” in Warsaw, “Royal Piano Festival” in Cracow, “Societé Chopin” in Geneva, “Mardi Rèvelation” in Salle Cortot (Paris), “International A. B. Michelangeli Festival” in Bergamo and Brescia, “Festival Dino Ciani” in Cortina d’Ampezzo, “Serate Musicali” and “Km Zero Porsche Festival” in Milan (on the recommandation of Martha Argerich) are to be mentioned. 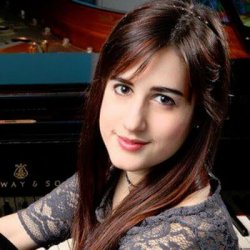