Lucija Majstorović, born in Zagreb, is considered to be one of the most promising Croatian female pianists of this generation. Despite her age, she has already been recognised as an authentic musical talent by major art institutions in Croatia and abroad.

She gave her first recital at the age of eight, and performed as a soloist with orchestra at the age of eleven.
Both as a soloist and chamber musician, she has won numerous international and national competitions: ten time winner of the National Croatian Competition, and prize-winner of the international competitions such as ITAKA Ljubljana (Slovenia), Carl Czerny Prague (Czech Republic), EPTA Belgium, EPTA Croatia, Bösendorfer Vienna (Austria), Marktoberdorf (Germany), Zlatko Grgošević (Croatia) and many more in Italy: Nuova Coppa Pianisti Osimo, Minerbio, Gorizia, Florence, Trieste, Cortemilia, Padua, Barletta, etc. In 2016, she won the modern music competition “Concours Festival – repertoire pianistique moderne” in Paris, where she was awarded, with the unanimity of the jury, “Le Chant du Monde” prize for the best interpretation of the Sonata by Sergei Prokofiev, and a prize for the best performance of the contemporary work.

Today Lucija Majstorović has been active in promoting contemporary music repertoire, of which she is already considered a talented interpreter: many composers turn to her, some of whom have dedicated their works to her. As a guest of many contemporary music festivals (Music Biennale Zagreb, Opatija Festival, Jeunesses Musicales Poland, Samobor Music Festival, “HR Projekt” of the Zagreb Academy of Music, Showroom of Contemporary Sound), she premiered works by many Croatian and foreign composers, for solo piano, prepared piano, chamber music, percussion as well as piano with orchestra.

Her musical education started in Pavao Markovac Music School, where she studied piano with Mara Bolfek, and percussion with Božidar Rebić. She then enrolled at Zagreb Music Academy, studying with Katarina Krpan, contemporary music expert, and her father Vladimir Krpan, an eminent Croatian pianist. In 2011, she way invited to study with Federico Gianello, a renowned Italian pianist, former student of Lazar Berman and Alexander Lonquich, at the first Steinway Society Academy (Verona). Currently she is studying with Bruno Canino in Florence, and at Accademia Nazionale di Santa Cecilia in Rome. 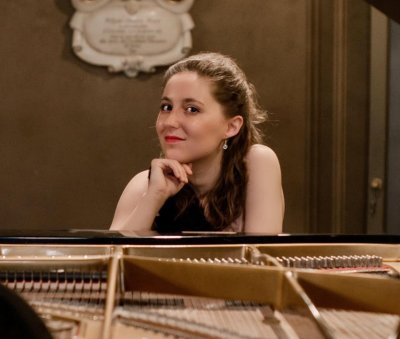