Russian pianist Victor Maslov was praised as “one of those people who is close to all-round mastery of his repertoire” by the New York Concert Review, following his performance at Weill Recital Hall (Carnegie Hall), New York.

In 2021, Victor graduated from the Royal College of Music, London, having completed his Artist Diploma as a Carne Trust Junior Fellow, and previously having received his Masters of Performance with Distinction and his Bachelor of Music with a First class grade. At the RCM, Victor studied piano with Professor Dmitri Alexeev and Head of Keyboard Professor Vanessa Latarche, and conducting with Toby Purser, Head of Conducting. Upon his graduation, Victor was announced as the recipient of the Queen Elizabeth the Queen Mother Rose Bowl for his achievements at the RCM, which will be awarded to him by HRH The Prince of Wales in March 2022. Throughout his studies, Victor has been grateful for the support of the Ruth West Scholarship, the Eileen Rowe Musical Trust Award, the Future of Russia Scholarship, the Munster Trust Award, and the Talent Unlimited.

Victor began his studies at the Gnessin Moscow Special School of Music, where he was taught by his mother Olga Maslova. He later became a scholar of the Vladimir Spivakov International Charity Foundation. Victor also has received masterclasses from Sir András Schiff, Dmitry Bashkirov, Peter Donohoe, Marios Papadopoulos, Tatiana Zelikman, and Leslie Howard. 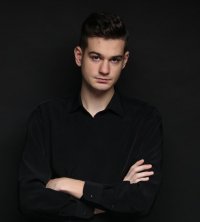 First performance for the Trust: 5 May 2021
Country: Russia