The Keyboard Trust reaches out to an even younger generation

The Executors of the will of the late Dr Kenneth Ross Weir appointed the Keyboard Charitable Trust to implement one of his key bequests: an annual award to support the musical education of a young keyboard player between the ages of twelve and twenty.

Dr Weir was a frequent visitor at the Trust’s performances by its new intake of highly gifted pianists, normally in their early twenties; he clearly thought of those whose circumstances deprived them of the training that might qualify them to enter the profession at this advanced level.

It is therefore natural that the Keyboard Trust’s three joint Artistic Directors – Prof. Leslie Howard, Dr Elena Vorotko and Christopher Axworthy – should be responsible for identifying the candidates for the annual Dr Weir Legacy Award. Teaching and holding masterclasses at world-wide institutions, serving on juries of international competitions and tending links with academic exchange networks, they have far-reaching opportunities to become aware of potential beneficiaries. The scheme will therefore not be accessible by application.

This additional activity fits well with the Trust’s traditional field of intensively assisting highly promising young artists – pianists, organists and historic keyboard players – to build an international career in the short interval between ending their formal education and confronting a fully independent professional life.  Those who respond well to Dr Weir’s support may find an easy continuity as they advance to maturity in their profession. Followers of this website should receive news of each annual award by the beginning of each new academic year.

Oscar Louis Colliar was born in Geneva, Switzerland in 2003. He began piano lessons at the age of six and graduated from the pre-professional piano class of the Geneva Conservatoire of Music in 2019 with the highest mark in the year. He is currently a music and organ scholar at King’s School, Canterbury where he studies piano with Neil Roxburgh of the Junior Department of the Royal College of Music in London.

He has taken masterclasses with Paul Badura-Skoda, Eugen Indjic, Elizabeth Leonskaja, Cristina Ortiz, Krzysztof Jablonski, Mūza Rubackytė and Leonardo García Alarcón, amongst others. He was the winner of the Brin d’Herbe Orléans Concours International in Orléans, France in 2015 and the Jeune Musique Concours International in Fribourg, Switzerland in 2016. He has worked with such composers as Heinz Holliger, Alicia Terzian, Michel Runtz and Michel Decoust. In 2016, he performed the world première of Decoust’s Pianopolis 2e niveau, Hommage à Sébastien Érard at the Théâtre des Bouffes du Nord, Paris, and the Italian première at the Piano City Festival in Milan. He represented Switzerland in the world’s first Switzerland-China Youth Concert in Shanghai in 2017. Oscar obtained second place in the Manchester International Concerto Competition in 2019.

An all-round musician, Oscar obtained the highest possible mark for organ in the Swiss National Youth Music Competition in 2019 and has been First Prize-winner multiple times in the Zürich Camerata Young Persons’ Composition Competition. He sang with the National Children’s Choir at the Edinburgh Festival in 2015 and was a soloist in several productions with the Geneva Opera and the Orchestre de la Suisse Romande, as well as performing on French and Swiss radio and recording two commercial CDs in Switzerland and France. He completed first year studies in Counterpoint at the Haute École de Musique de Genève, obtaining a First in this discipline at the age of fifteen.

Oscar holds an offer to read music at Trinity College, Cambridge starting from October 2021, where he will also be organ scholar. He has also been granted the Keyboard Trust’s Dr. Weir Legacy Award for his studies at Cambridge from 2021-2024. 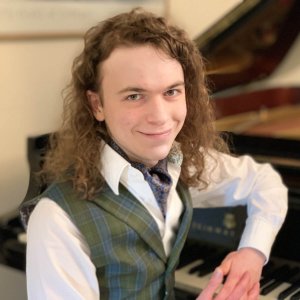 Luca Grianti was born in Milan, Italy in March 2002 and started learning the piano at the age of six in the music department of the British School of Milan. Early signs of musical talent allowed him to compete and win First Prize in several national and international piano competitions around Italy, as well as passing the ABRSM Grade 8 exam with distinction at the age of eleven. Amongst the list of more than twenty first prizes collected, the most noticeable competitions were the Giulio Rospigliosi International Competition in Lamporecchio, the Nuova Coppa Pianisti in Osimo, and the Premio Crescendo in Florence.

At the age of eleven, Luca decided to pursue his dream of becoming a concert pianist at Chetham’s School of Music in Manchester, United Kingdom. There he studied with Dr Murray McLachlan. In 2014, Luca won the twelve and under category of the EPTA UK Competition, where he also reached the finals in 2018 for the eighteen and under category. In 2015 and 2018, Luca also won the Yamaha Competition which is held annually at Chetham’s.

Luca has also attended an array of festivals around Europe and abroad. For example, in 2019, Luca participated in the KlaviCologne Festival in Hamburg, the Tel-Hai International Piano Festival in Israel and the Eppan Piano Academy in Italy. Here, Luca had the chance to work with world-renowned professors such as Claudio Martinez Mehner, Dmitri Bashkirov, Matti Raekallio, Lilya Zilberstein, Tamas Ungar and Dmitri Alexeev, among many others. Furthermore, in May 2019, Luca was invited to Fort Worth, Texas for the Cliburn Junior International Piano Competition and Festival as a festival participant and had the opportunity to perform in various masterclasses and concerts during his stay.

Since 2014, Luca has performed in concerts in many countries such as Italy, Germany, Austria, The Netherlands, the United Kingdom, the United States and Israel, amongst others. A particularly special moment was his debut with the Società dei Concerti at the Grattacielo Pirelli concert hall in Milan in 2018. For the occasion, Luca performed all twelve Opus 10 Chopin Études, as well as music by Bach and Shchedrin. In August 2019, Luca won Second Prize in the Manchester International Piano Competition where he had the opportunity to play Beethoven’s Piano Concerto No.3 with Manchester Camerata and Stephen Threlfall as Conductor.

Since September 2020, Luca has been studying at the Juilliard School in New York with the celebrated teacher and pedagogue, Veda Kaplinsky. This is only possible due to the generous contribution of the Keyboard Charitable Trust’s Dr Weir Legacy Award which supports young musicians with funding for undergraduate studies.

Born in Shrewsbury in 2001, but emigrating the following year to Korea, Elias began his piano studies at the age of five in Daegu, South Korea. After making rapid progress, he was taken on by Russian pianist, Oleg Shitin, under whose guidance Elias knew success in a number of competitions, including winning the junior prize at the Gumi National Piano Competition in 2012.

In May 2013, at the age of eleven, Elias gave his debut recital in Chester, UK and has performed regularly in concerts since throughout Great Britain, including as a soloist with a number of orchestras).

Between 2014 and 2019 Elias was a student at Chetham’s School of Music in Manchester, where he was a pupil of Dr Murray McLachlan (Head of Keyboard), under whose tutelage Elias succeeded in becoming the youngest ever winner of the Chetham’s Beethoven Competition in 2015.

Elias is currently a pupil of Gary Graffman at the Curtis Institute of Music, Philadelphia, USA. 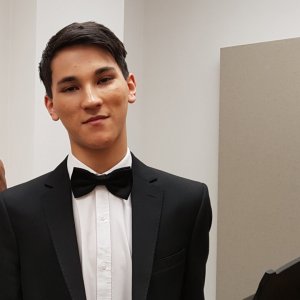